Bringing together the cream of the world’s athletes with disabilities, to compete in 22 different sports; the 2020 Summer Paralympics in Tokyo are due to start later this month. Postponed until this summer due to the Covid-19 pandemic, it is envisaged the Games will go ahead, as planned, from 24th August to 5th September. 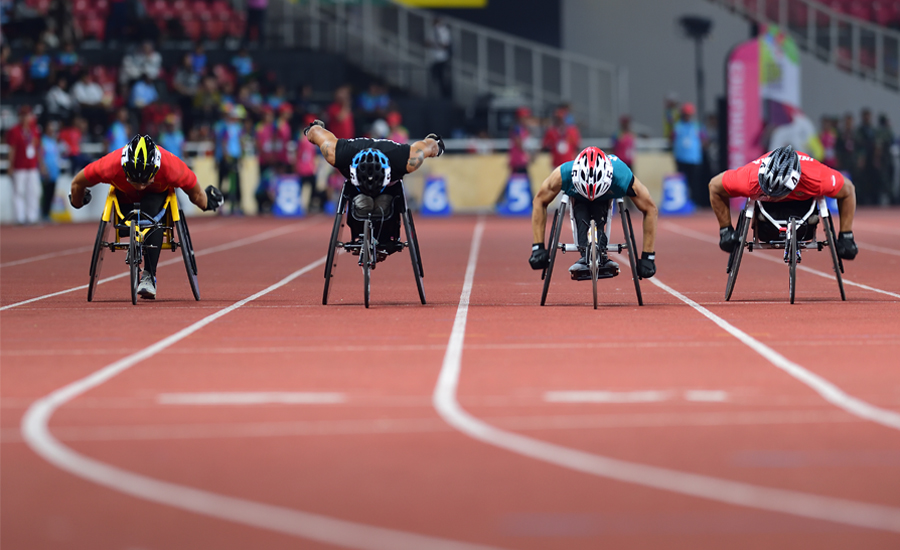 Sports aimed at athletes with a disability have existed since the late 19th century. Sports clubs for deaf people were already in existence in Berlin, Germany, by 1888. However, it wasn’t until after the Second World War that more disabled sports clubs were widely introduced for war veterans and civilians injured in conflict.

In 1944, Dr Ludwig Guttmann was commissioned by the British government to open a spinal injuries centre at Stoke Mandeville Hospital. Initially, taking part in sports activities was part of the patients’ rehabilitation. This evolved into recreational sports and then into competitive sports.

During the opening ceremony of the London Olympic Games on 29th July 1948, Dr Guttmann organised the first competitive event for athletes in wheelchairs, calling it the Stoke Mandeville Games. Sixteen injured ex-servicemen and women took part in an archery competition. This was a milestone in Paralympics history.

The International Stoke Mandeville Games were founded in 1952, after Dutch ex-servicemen joined the movement. During the next decade, these games evolved into the Summer Paralympic Games, which made their debut in 1960 in Rome, Italy.

At the first Paralympics, 400 athletes from 23 countries competed. The Summer Paralympics have taken place every four years since.

Growth of the Paralympics

An International Working Group on Sport for the Disabled was set up in 1960, with the backing of the World Federation of Ex-Servicemen. It studied the challenges faced by people with disabilities who wished to take part in sporting activities.

This resulted in the launch of the International Sport Organisation for the Disabled in 1964. It provided opportunities for athletes with disabilities who couldn’t affiliate with the International Stoke Mandeville Games. The goal was to embrace sportspeople with all kinds of disabilities including amputees, vision-impaired athletes, people with cerebral palsy and paraplegics.

At the beginning, 16 countries were affiliated to the ISOD. It pushed to include blind athletes and amputees in the Toronto 1976 Paralympics and campaigned to have athletes with cerebral palsy included in the 1980 Paralympics in Arnhem.

The ISOD acted as a coordinating committee for disabled athletes who wished to take part in sporting competitions. Other global organisations were set up, including the Cerebral Palsy International Sports and Recreation Association in 1978, and the International Blind Sports Federation in 1980.

A non-profit body, it was launched in Dusseldorf, Germany, as the global governing body for Paralympic sporting events. The name derives from the fact the international games for disabled athletes are parallel games to the Olympics. It marks the two movements existing side-by-side.

Many people with disabilities aspire to take part in the Paralympics, not least to motivate others and encourage them to follow their dreams.

Event sponsor BP has partnered with the British Paralympic Association for 12 years, helping the Paralympics GB team to compete at the Games, while supporting the BPA’s goal of inspiring a better world for people with a disability.

In the run-up to the Tokyo Games, Paralympics GB launched a campaign to support the UK’s 13.9 million people with disabilities. It followed research by UK-based consultancy, ComRes, which suggested Paralympic athletes were the key to challenging people’s perceptions of being disabled.

Our talented and hard-working Paralympians create wider social benefits, inspiring others and giving them hope. Gaining the support of the wider British public can help ensure people with disabilities are represented fairly in society.

At the Rio Paralympic Games in 2016, an incredible 147 medals were won by the British team. It is hoped the 250-strong Paralympics GB team in Tokyo can top this success.

Britain has many famous Paralympic athletes, including perhaps the best-known female athlete, Tanni Grey-Thompson. Her amazing tally of 16 athletics medals includes 11 gold, four silver and one bronze. Competing across five Games, this trail-blazer for athletics was made a Baroness following her huge success.

The Cardiff-born athlete has spina bifida and has been a wheelchair user since she was seven years old. She has also won the London Marathon six times. Her final victory in 2002 was only nine weeks after giving birth to her daughter, Cerys.

Another outstanding British Paralympian is swimmer Dave Roberts, who has won 11 gold, four silver and one bronze medal over three Games. After being diagnosed with cerebral palsy as a child, he started swimming to keep his muscles supple.

He sticks to a strict training routine, including spending sixteen hours per week in the gym and four hours in the swimming pool. His dedication to his sport helped him to win the succession of medals. He won eight in the Beijing Games of 2008 in the 100-metre, 200-metre and 400-metre freestyle, as well as in the 4 x 100-metre relay race.

Britain’s most successful Paralympic athlete ever is swimmer Mike Kenny, now aged 67, who won 18 medals in total, including 16 gold and two silver. He competed in four Games between 1976 and 1988. The Manchester athlete was paralysed after falling from a ladder in his youth and began swimming as therapy in 1971.

He regained the strength in his upper body and started swimming competitively. He managed to compete without any exterior funding, with his wife, Marcia, becoming his coach and trainer. He broke several world records during his career and at his final games in 1988 beat his own personal best times in events an amazing seven times!

Qualifying for the Paralympics

In order to qualify as a Paralympic competitor, the athlete’s disability must have been present before the age of 18. It must affect the social, conceptual and practical skills needed for everyday life. The disabilities can include physical, vision or intellectual impairment.

Training routines vary from person to person. In general, strength training is an important part of the daily regime. Top US Paralympic swimmer Cortney Jordan swims for two hours a day, followed by a session at the gym.

Sprinter Femita Ayanbeku, of the US, strength trains, incorporating deadlifts, box jumps and core work into her regular routine. She believes muscle endurance and power are important, while strength ensures a powerful start and continual speed.

Sleep is integral to an athlete’s performance; it enables the heart to rest and gives tissue and cells time to repair. This helps the body to recover from physical exertion.

Safe sleeping solutions are available for people with cerebral palsy and other medical conditions that require extra care and comfort during the night.

Contact Kinderkey for further information on our wide range of specialist beds.