The Four Types of Cerebral Palsy

Cerebral palsy is a medical term used to describe a group of disorders that impact on a person’s balance, motion and posture. The medical profession diagnoses the different types of cerebral palsy based on the patient’s main type of movement disorder: the most common include spasticity (a condition that causes muscles to tighten or stiffen, preventing fluid movement), rigidity, abnormal muscle tone and involuntary movements.

Experts have diagnosed four main types of cerebral palsy, each with their own symptoms. They are ataxic, athetoid, spastic and mixed. 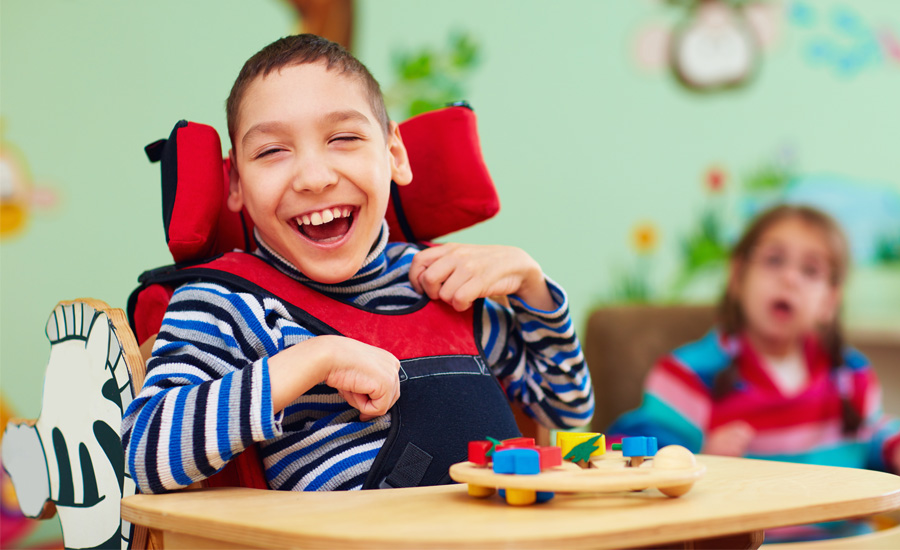 Learning more about the different types of cerebral palsy can help improve your understanding of the condition and enable a decision to be made on the best course of treatment and therapy for your child.

The most common type is pyramidal cerebral palsy, also known as spastic cerebral palsy, which affects more than 70% of patients. Symptoms include tight muscles that can’t relax in some parts of the body. The affected muscles are referred to as spastic, or hypertonic. This affects the joints and they can become rigid, making it difficult for the person to control their movements, speak and eat. They may walk with an unusual gait – on their toes, for example.

There are three categories of spastic cerebral palsy: spastic diplegia causes muscle rigidity in both legs, although both arms can be affected to a lesser degree; spastic hemiplegia impacts on the hand, arm and leg down one side of the body; the third type, spastic quadriplegia, is the most serious.

Spastic quadriplegia occurs when there are brain malfunctions. It is caused when the motor cortex of the brain is damaged. It can also materialise following damage to the pyramidal tracts, or through general cortical damage.

When the brain injury is very severe, symptoms of cerebral palsy will be worse too. Recognising the symptoms can be challenging, but the child will begin to miss developmental milestones, which can be the first sign. However, physicians can still take up to 18 months, on average, to make a diagnosis.

Extrapyramidal, dyskinetic or athetoid cerebral palsy affects between 10% and 20% of patients. It causes involuntary movements that the patient can’t control, including writhing of the body and jerky movements of the legs, feet, arms and hands.

Infants with this condition have poor head control. As the patient matures, their muscle tone generally improves, although this can vary from person to person. This condition can also cause rigidity or dystonia (uncontrollable contractions) of the upper limbs, rather than the lower ones. It can also impact on oropharyngeal muscles, making speaking and eating challenging. Intelligence is rarely affected, despite the condition often being caused by the child suffering a lack of oxygen at birth.

The cause can also be attributed to genetic disorders. People with this condition can have lesions on parts of the brain.

A rarer type, this affects up to 10% of children with cerebral palsy. People with this condition tend to have tremors and uncontrollable movements, leading to difficulties in performing tasks that require precise motor control. It can make tasks such as writing or buttoning clothes a little more challenging. Walking can be unsteady.

This type of cerebral palsy occurs if the cerebellum, which controls uninhibited motor function in the brain, is damaged. Usually, it isn’t diagnosed until the child is around 18 months old.

As its name implies, people with mixed cerebral palsy can have symptoms of spastic, ataxic and athetoid cerebral palsy. The exact symptoms can vary from person to person.

Mixed cerebral palsy is caused by damage to numerous parts of the brain. The most common symptoms include athetoid and spasticity movements, although other combinations can occur – hence it can be challenging to diagnose.

This can affect the child’s personal development and the whole family, as 40% of children with cerebral palsy require help from their parents or carer at least once during the night.

To help children with cerebral palsy and their families, Kinderkey has a number of special safe sleeping solutions, aimed at keeping children comfortable and safe during the night, while improving their quality of life.

Featuring high, soft sides and a four-part profiling mattress frame, these include the Bearsnoozzze bed, or the CosySafe cot, which is an electronically-operated, profiling, height-adjustable, nursing cot or bed for people of all ages.

Suitable for children and adults, the Bearhugzzz SpaceSaver bed features a bespoke design that can fit in any space. The wooden base allows access for a mobile hoist and it can be fixed to the walls on two sides for added security.

When were the multiple conditions of cerebral palsy discovered?

The first person to study and define cerebral palsy was English surgeon Dr William John Little, of Whitechapel, whose medical research began in the 1830s. While in his 20s, he had recognised some symptoms in himself after having poliomyelitis, caused by the polio virus, as a child.

It left him with impaired motor-sensory functions in his left leg, which was worsened by the fact he had talipes, after being born with one foot rotated downwards and inwards. This led to his medical interest in lower limb mobility impairments in particular.

He joined the Royal College of Surgeons in 1832, after completing his medical training. credited with first defining cerebral palsy in 1853, he began giving lectures on how birth injuries could lead to the condition in children. His research turned into a lifelong project to help children with cerebral palsy.

Further research by Dr Sigmund Freud, the Austrian neurologist, found cerebral palsy might be caused by abnormal development in the womb. He and Little subsequently disagreed on the cause of cerebral palsy, but Freud continued with his research regardless.

Although they were the two main innovators when it came to research into the condition, further studies and research over the years continued to find out more about cerebral palsy. Freud was the first medical expert to unite the various motor impairments among children under the term infantile cerebral palsy.

Research continued into the first half of the 20th century. It was recognised that there were four specific types of cerebral palsy and as our knowledge of the condition increased, so did the medical profession’s ability to improve treatments.

How advanced are medical treatments?

Currently, there is no cure for cerebral palsy, but treatment is available to help families with children and adults with the condition, aimed at helping them to be as independent and active as possible. They are cared for by a team of healthcare professionals, who liaise with the family and the person with cerebral palsy to come up with the best treatment plan.

Cerebral palsy isn’t progressive, so it doesn’t get worse over time. Meanwhile, the medical sector continues to work hard to improve treatments and find a cure.