Dan Keplinger has a passion for art that has made him the voice of his generation. The 47-year-old artist, who has cerebral palsy, uses a paintbrush and art to express himself. He says, “Translating myself onto canvas became my language,” after rebelling against the computer-generated voice that he used in his youth.

He has transitioned from being a self-conscious teenager who found it hard to express his feelings into an inspiring artist, who paints subjects that echo his feelings and create an internal connection. 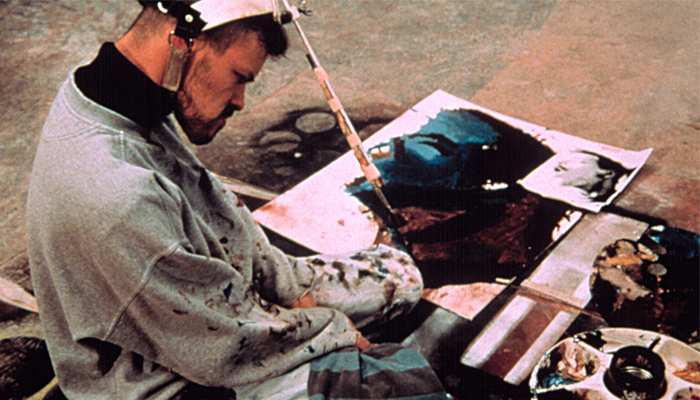 Born in January 1973, in Baltimore, Maryland, to 18-year-old single mother, Linda Ritter, he was momentarily deprived of oxygen during a difficult birth, which left him with a brain injury and cerebral palsy.

He was enrolled in a special nursery school run by Central Maryland United Cerebral Palsy when he was 18 months old. At six, he attended a special school. Experiencing a lot of frustration, he didn’t have an easy time growing up – his mother was encouraged to put him in an institution, but she refused.

Reportedly, he earned the affectionate nickname “King Gimp” from his neighbours in Baltimore, because his house was on top of a hill and they would see him rolling down it at speed in his manual wheelchair. He once explained that the name signified his fighting spirit.

He felt self-conscious as a teenager and when he got his first powered wheelchair, he felt it gave him some freedom – but he remained frustrated that he couldn’t express himself vocally, except through computer-generated speech.

He always aimed to be independent, but felt trapped, until he moved into mainstream education at Parkville High School in Maryland at 16, where his art teacher encouraged him to paint. Little did he know that this would be the start of a lifelong career as an internationally renowned artist.

Keplinger’s life story has been depicted in a series of documentaries, starting when he was nine. He was followed by film-makers Susan Hadary and William Whiteford, who were studying children with a disability and how they were being educated.

They continued filming him as he grew into an adult, including his transition into mainstream education at 16. Eventually, using 80 hours’ raw footage and an 80-page memoir written by Keplinger, they produced an Oscar-winning documentary, called King Gimp, in 2000.

It documented the lows and highs of his life so far and his career as a contemporary artist. He creates charcoal drawings and canvas paintings, looking for the “abnormal in normal life” when it comes to the subject matter. His abstract paintings depict inner feelings.

He says translating himself on to canvas has become a language that he needs to exist. He wants people to see and understand his feelings through his art.

Using a paintbrush connected to a headband known as a head stick, he paints on to a large canvas measuring 4ft by 5ft on average. Friends help him by cutting and positioning his canvas and mixing the paints. He sits on the floor – his apartment has a floor covering of 6-inch thick foam to stop his knees from getting sore.

With 15 brushes, that he interchanges to get the desired effect, his paintings often depict wheelchairs, as he says this is his main mode of transport. Through his art, he aims to show everyone that they all have the ability to persevere.

Painting landscapes, abstracts and self-portraits, he had his first professional art exhibition in May 2000. Since then, his art has been featured at many prestigious exhibitions, including the Millennium Arts Centre in Washington, the Chicago Cultural Centre in Chicago and the United Nations headquarters in New York.

Never letting his disability get in the way, as well as being an artist, he is a motivational speaker who attends disability organisations, giving talks to inspire other people who are facing challenges.